Rings have been used as a symbol of the promise of love and marriage. A proposal for marriage is often represented with an engagement ring and wedding rings serve as the token of lifetime union of a couple. But some couples have their rings custom-made with designs that mean something between them.

Traditionally-speaking, the ring denotes a certain thing about their relationship, or exemplify a part of their religious or cultural background. For some, they opt for Native American designs for their engagement rings and wedding bands. Which of these Native American ring designs are typically used and what does each design represent? 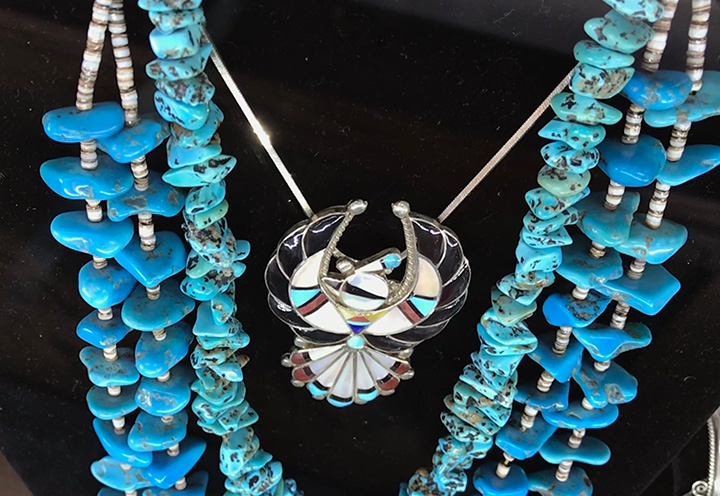 The History and Evolution of Native American Jewelry Designs

Throughout the years, jewelry has been a part of the Native American culture. They use it for trade as well as pieces of adornment. Originally, though, the tribes of the Native Americans do not use the traditional way of wearing rings in their weddings. They have not worn rings as a symbol of the couple’s marriage and lifetime promise for each other.

This is because the smelting of gold is not a typical doing of the tribes. Nowadays, Native American engagement rings and wedding rings have risen in popularity. Nowadays, they are taken as a representation of faith, honor, and of course, love.

The Navajo Tribe was predominantly the ones who taught the other tribes about jewelry making including necklaces, bracelets, belt buckles, and rings. They acquired the knowledge from the Spaniards in the 16th century.

It was the time when they noticed the jewelry they wore and along with it was the social status the pieces of jewelry holds. One of the most common types of stones they use in their jewelry designs is turquoise, a semi-precious gem that has been used for over a thousand years now.

Turquoise is a type of stone that is commonly abundant in the Southwest of the United States. You can find them as well in South America. The tribes also use other types of natural, semi-precious stones as their jewelry making evolved.

The Early Form of Jewelry-Making

They began their practice in silversmithing in the 1800s when it was introduced to them by the Spanish traders. Today, most of the Native American engagement rings and wedding rings are made of silver and decorated with engraved designs like the sacred animals that symbolize a huge part of their culture.

These designs often come with engraved images of other cultural symbols of the tribes. Some of the classic and traditional designs that you can find are the human or earth forms of famous spirits, the sun, fruits, and trees.

Rings that are ornamented with images inspired by the Native American culture often serves as beautiful alternative designs for engagement and wedding rings. Some couples may use these designs to signify their heritage and some may simply admire their unique beauty.

Native American ring designs vary on different factors which include the following:

Classically, colorful rings are often used for wedding bands as the Native Americans take colors a high form of symbolizing their culture. The colors add more depth to the symbolism of the rings. Most colors they use that play a role in their tribe’s history and their culture are blue, red, white, and green.

The gemstones are more commonly used as ornaments on the pieces of jewelry of the Native Americans in comparison to using diamonds as semi-precious stones often express greater meaning to their culture.

Cut of the gems

“Cabochon gems” or polished gemstones that look more natural-looking are what Native American tribes mostly use for their rings.

Native American rings can often be seen with geometrical patterns adorning around it that subtly signify the heritage of their tribe.

Carvings on the rings

You can mainly notice different carvings, etchings, or engravings of animals, feathers, trees, or other symbols that serve as a huge part of the Native American culture on their rings.

The most common types of animal carvings you can see on their rings are bears, wolves, rabbits, and deer. They also engrave and carve bear claws or wolf paws as a symbolism of their tribes.

Most Native American wedding rings are made of silver, though, sometimes they use gold or platinum.

Although contemporary rings are made of metal, Native Americans also used non-metal materials. They use this to make bands such as wood as it serves to give them more connection to their land and culture.

The Most Common and Recognized Native American Designs

The symbols and designs that you can see carved or engraved on the Native American rings may vary on their meanings and what each denotes.

Here are some of the most common symbols of the Native Americans that are used as designs and ornaments on their engagement rings and wedding rings:

Bears serve as a sacred animal to the Native Americans. The representation of the bear may vary on their significance on each of the tribes. The most common meaning that the bear symbolizes in their culture is spiritual power, physical strength, and courage.

Since the bears play a very significant role in the Native American culture, the bear claws also serve as a highly recognized symbol for the tribes. It often represents a connection between the tribes and the animal itself, showing the protection it gives to the people.

Direction and the ability to be alert are what the arrowhead significantly represents in the Native American culture.

The arrow symbol represents the tribes’ weapon, the bow, and arrow, which they used in hunting to catch their food. Metaphorically, this symbol signifies defense and protection. Peace among tribes is what a “broken arrow” symbolizes.

Communication is what mainly the wolf symbol means in the Native American culture. It is seen as a deity to most culture and its image is used by tribes to encourage loyalty, fierceness, and compassion among their people.

The water or the wave patterns that are often recognized on wood carvings, silver and wood jewelry, and the tribes’ pottery symbolizes the cycle of life, water, and the sense of renewal.

The most customary meaning behind the “Sun” symbol in the Native American culture is that it serves as the “Earth’s Guardian” or “Earth’s Protector” or something in that same sense. It also signifies energy and healing. Some tribes see the Sun symbol as the “Giver of Life.”

Usually, depending on the season, the meaning conveyed by the Moon symbol varies. Oftentimes, it serves as a symbol of protection and serenity. For some tribes, the moon represents the time of harvest.

Fertility, renewal, and change are what the “Rain” symbol denotes in the Native American culture.

As one of the most common symbols in the Native American culture, the fire symbolizes cleansing, purification, and renewal to the tribes.

Man in the Maze

In the Native American culture, the deep connection to their ancestry and the journey of life is what the “Man in the Maze” symbol means. It is the representation of the seven paths of life or the cycle of life, and that the journey is never going to be an easy one.

End of the Trail

This is the image being of an Indian warrior on a horse, weary and tired from the battle which serves as a reminder of the tribes’ suffering. Thus, the “End of the Trail” symbol of the Native Americans also denotes their connection to their ancestry, their strength as a tribe, and their pride.

Where To Find Wedding Rings In Colorado Springs? Lane Mitchell is one of the go-to Colorado jewelry shops if you are you looking for engagement and wedding rings in Colorado Springs. We offer top-quality and reliable services and we assist you with care and honesty throughout the whole process of your wedding rings search.

We offer a wide variety of Native American engagement rings and wedding rings designs. Also. we make customized sets varying on your preferences.

To know more about us here at Lane Mitchell Jewelers and all the services that we offer, you may visit our official website at www.lanemitchelljewelers.com. You may also reach us through our contact details here for any questions or inquiries.